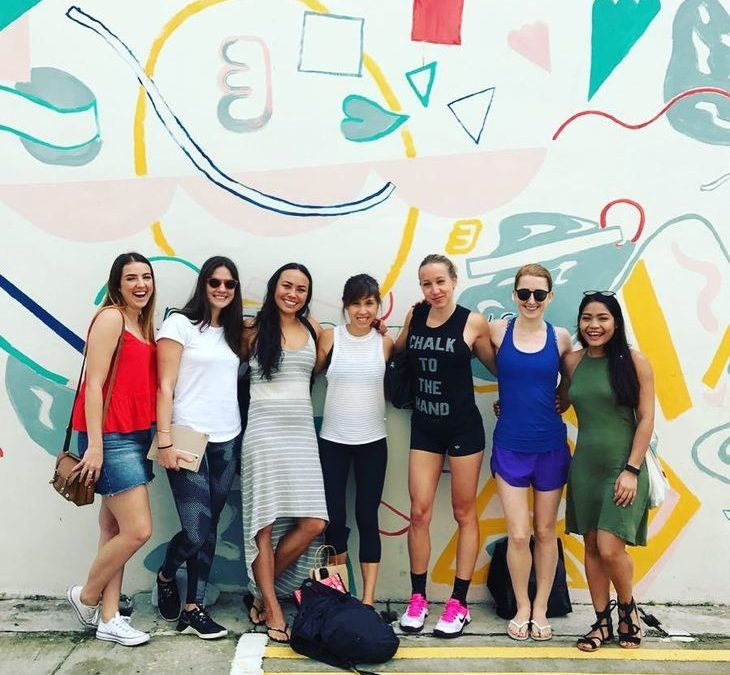 Ever wondered who comes up with those cheesy tag lines on Facebook or sends out the (annoying) newsletters you get monthly from Barre 2 Barre? This week, meet resident Writer and Marketing Communication Associate, Nicole Friets!

What does wellness and being healthy mean to you?

I believe wellness and being healthy encompasses all aspects of life – physical, mental, emotional, and spiritual. As someone who struggled with an eating disorder for a long time, I know firsthand that if one of those spheres is thrown “off” balance, it can skew the entire picture.

I’ve also learned that wellness and being healthy varies from person to person – what may be healthy for one, may not be for another. I remember following diets I read about blindly based on the “after” pictures shown – only to face side effects that were not the most pleasant (low energy, irritability, etc).

Last, I believe what wellness and being healthy means to an individual is something that continually changes based on a variety of factors including what season of life they are in, priorities, etc.

How did you get into BarreAmped and what are your future plans for barre?

I was a regular at Anthem (the spin studio across the road) where I met an instructor who used to work at Barre 2 Barre. We started hanging out and she told me of her plans to become BarreAmped certified – and asked me to support her during her apprenticeship. In other words, I would come 1-2 times during the week to take her classes. Those weekly sessions eventually turned into daily sessions as I fell in love with the method as well as the team.

In terms of the future… probably just continue to work on my form which has improved (but far from perfect).  I also have a bet with Denise about when I can get my first handstand or split…. one can hope, right?

Writing and marketing wise, I plan to continue to help share the benefits of BarreAmped and to break misconceptions that barre is an “easy workout only meant for girls”!

Anyone who knows me knows I have a problem sitting still – I’m always on the move!

I do CrossFit almost daily alongside barre. Many have the misconception that the two are polar opposites but I firmly believe that they are complementary and can actually supplement the other over time (we’ll save that for another writeup).

I also enjoy doing anything in the sun (whether it’s swimming, cycling, or simply taking long walks), good massages, baking, writing, singing, and hanging out with loved ones.

List your 3 dinner party dream guests, what would you talk about and what dish would you prepare for them?

A younger version of myself* –  I would definitely tell her that love wins at the end of the day (whether that is in terms of self love or showing love to others), to focus on the big picture instead of fretting the little meaningless things, and to surround herself with those that mattered as opposed to those who she had to strive for approval from. I would cook her a delicious gluten free meal to prepare her for her gluten intolerance later on in life :p

Donald Trump –  to get things straight, I am not a supporter of Trump and (most) of what he stands for. At the same time, I also believe that everyone has a story and I (try not to) judge someone before I get to know that story. I would love to hear how he came to some of the beliefs he came to today as well as just to get to know him as a person – because I’m sure there is a reason why some people speak so highly of him.  I would definitely cook him a true blue Singapore dish – maybe a real “Singapore noodles” (not those fake versions found all over the world) or a spicy curry (to see if his face can get redder than it actually is!)

Karlie Olsen –   a name that wouldn’t ring a bell to many. She was someone I met during a short stint to the United States about 8 years ago – and we were best friends for the longest time. We had plans to be each other’s bridesmaids, go on our honeymoons together, and so on. Unfortunately, a few years ago, she went through a rough spell and deleted all means of social media and communication… and I’ve never been able to contact her since. I don’t think I’ll bother cooking anything – we’ll be talking so much, any food prepared would remain uneaten.

*I loved Denises’ answer in her recent interview!

DisneyWorld – technically, this isn’t a destination in itself but hey, it’s Disney. I’m a self confessed Disney nerd and have visited Disneyworld a couple of times with each time being more magical than the last. It’s probably the only place in the world where crowds and long lines don’t phase me (at least not too much).

Singapore  – I know this is a pretty lame answer but I really love this city! I often have friends visiting from out of town and therefore have played tour guide on more than one occasion. Each time I have to come up with an itinerary of what to do – I always come across something new or fall in love with my home all over again. I feel like Singapore is such a well maintained and “moving” city – there’s always something new to do and things are constantly being updated.

South Africa – My grandparents planned a S.K.I trip (Spend Kids’ Inheritance) a few years ago for the entire family. We were definitely spoilt with top notch accommodation, a private safari lodge, and catered tours just for us.. It was unbelievable – the exhilaration of walking next to baby elephants, sitting an arm’s length distance away from lions, and being chased by a rhino (yes, it really did happen!) are all things that words can’t describe!

I’m going to cheat and list a few more favourite places: New Zealand (for the nature), Tokyo (for the food and people), and San Francisco (for the amazing vibe and healthy eats).

I would want to travel to:

Maldives – I probably have to get my scuba license before I go. From what I hear, though, it’s exactly like it appears to be in photos (which is absolutely stunning). I love the water and nature – so the mix of those two things are a clear draw. Being underwater always feels surreal – like living in another world!

To be honest, there aren’t many places that I would want  to travel to –  I’ve been blessed in being able to go to most of the places I want to go to. If anything, it’s probably more experiences like being able to climb the Great Wall or diving with sharks or bungee jumping over a beautiful lake which would be on my bucket lists as opposed to specific locations 🙂

We use cookies on our website to give you the most relevant experience by remembering your preferences and repeat visits.
By clicking “Accept”, you consent to the use of ALL the cookies.
.
Read MoreAccept
Manage consent

This website uses cookies to improve your experience while you navigate through the website. Out of these, the cookies that are categorized as necessary are stored on your browser as they are essential for the working of basic functionalities of the website. We also use third-party cookies that help us analyze and understand how you use this website. These cookies will be stored in your browser only with your consent. You also have the option to opt-out of these cookies. But opting out of some of these cookies may affect your browsing experience.
Necessary Always Enabled
Necessary cookies are absolutely essential for the website to function properly. These cookies ensure basic functionalities and security features of the website, anonymously.
Functional
Functional cookies help to perform certain functionalities like sharing the content of the website on social media platforms, collect feedbacks, and other third-party features.
Performance
Performance cookies are used to understand and analyze the key performance indexes of the website which helps in delivering a better user experience for the visitors.
Analytics
Analytical cookies are used to understand how visitors interact with the website. These cookies help provide information on metrics the number of visitors, bounce rate, traffic source, etc.
Advertisement
Advertisement cookies are used to provide visitors with relevant ads and marketing campaigns. These cookies track visitors across websites and collect information to provide customized ads.
Others
Other uncategorized cookies are those that are being analyzed and have not been classified into a category as yet.
SAVE & ACCEPT
Hong Kong sign up
Amsterdam sign up
Training Singapore sign up